Today we'll talk about some of the basic ways that computers work and interact with one another. We'll also begin discussing the history of computing in the context of operating systems, UNIX, and Linux.

In class we will also start with some hands-on-keyboards practice with moving around the shell and manipulating files.

A "client" in the context of computing is any hardware or software that is used to connect to a service being run on a server. The client-server model

Very little in the networked world operates locally, and that is as it should be.

A "server" is a piece of hardware or software that runs a service for clients to connect to.A typical server rack in a datacenter 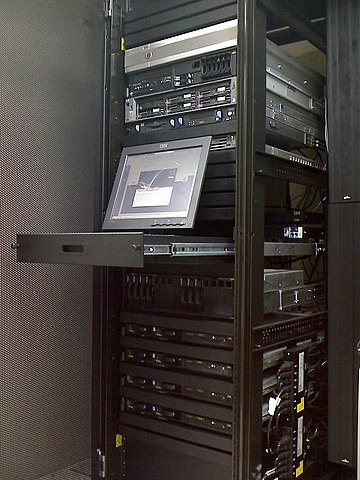 Sometimes, certain types of servers are referred to as "daemons." Don't worry, your computing infrastructure is not possessed.

They are called this in reference to Maxwell's demon, which is itself a reference to the ancient Greek notion of a δαίμων (daimon). These were spirits that operated the world around us, unseen and unseeable. Broadly construed, they were the forces that made all of the otherwise unexplained processes happen in the physical world. James Clerk Maxwell adapted this notion to pose potential violations to the Second Law of Thermodynamics. His demon acted precisely in the way that the Greek daimon did, except naughty.

All that aside, a daemon is a "background process." Some piece of software that runs on a computer in the background and waits for something to happen. These processes listen, typically on a specific port for an event to occur. When that event occurs, the daemon executes some set of instructions.

In a server, that event will be a request for something.

In a web server, that event will be a request for a web page or some other web content.

On a web server, the daemon that serves the web pages listens on port number 8000, unless otherwise specified.

When it receives a request on port 8000, it dutifully gathers up all of the requisite parts of the web page, interprets them, and then sends them to your client (a.k.a., your browser) and then all of that information gets prettified and placed on your screen so that it can go into your eyeballs and then your brain.

Questions to keep in mind: {#questions-to-keep-in-mind:}

In this class, when we operate on a remote system, we will do so through a few different protocols, which will be detailed shortly.

Operating on a remote system directly--that is, manipulating files and issuing instructions in a command shell--is preferable if you wish to have a high level of control over what you are doing. It also keeps you closer to "bare-metal" computing. In most cases, what we will be doing is not, in fact, bare metal computing, but rather interacting with systems that run on huge banks of servers, the resources of which have been virtualized and distributed across many more systems than there could possibly be if each were running on its own.

This abstraction, however, does not take us too far from the experience that we are aiming at. We will learn all the same techniques as if we were running on systems directly.

I will not go too deeply into the history of Linux and UNIX, except to say a few things and explain why we are using these as our primary platforms for operation.UNIX history

UNIX is a general purpose, multitasking, multi-user operating system designed in the 1970s at Bell Labs. The name "UNIX" now refers to a whole family of operating systems.

Linux was developed initially in 1991 by a student at Helsinki University named Linux Torvalds, who still develops the operating system kernel today. The project was inspired by the lack of a functioning kernel for the GNU UNIX-like system designed by Richard Stallman. Torvalds says that if the GNU kernel had worked, he would likely have never written Linux.

When you use Linux today you are actually using GNU and Linux together. Linux provides the operating system kernel and GNU provides the system software layer that runs over it and allows you to interact with it. There are myriad different versions of GNU/Linux floating around out there. All are Free and Open Source Software, which means that you can download the source code, compile it yourself, and run it on any system you like. Below is a family tree of all existing GNU/Linux distributions. Have a look to see if you can find Ubuntu, the system that we are most likely using on our CodeAnywhere Dev Boxes.

Operating systems are complex, as is their history, and I am afraid that I cannot do justice to it here. This history (and a general history of personal computing) is best told in a long essay by science-fiction author, Neal Stephenson.Stephenson, N. (1999). In the beginning was the command line.

Read that piece at some point, if you have a chance. It's fascinating, exceedingly well-written, and a reasonably easy read.

Right, so why is this important?

Well for starters, some version of UNIX or Linux runs on the backend of nearly 70% of all public-facing web servers. In addition to that, Linux runs on 97% of supercomputers and computer clusters.

UNIX and Linux surround you, physically and otherwise.

It is important to know something about the things around you. Otherwise, they might as well be operating as if by magic.

So, if you ever have occasion to operate on a remote system, it is terribly likely that you are going to be logging into a Linux box somewhere, and failing that, a UNIX box. From now on, you'll never be able to say that you don't know how to do that.

For the next session

Look at Joseph Wynn's "Hacker's Guide".Wynn, Joseph. “A Hacker’s Guide to Git.” Wildly Innacurate. Last modified May 25, 2014. http://wildlyinaccurate.com/a-hackers-guide-to-git/. It is a really useful tutorial for new users of git who want to know ways to get things done with it.

We will also return to "Learning the Shell"Shotts, William, Jr. “Learning the Shell.” LinuxCommand.org. http://linuxcommand.org/lc3_learning_the_shell.php. for more command line fun. We'll do some more exploring once we are up to speed with git as well.